How Accurate Are Drone Aerial Maps?

A typical aerial mapping flight entails a drone equipped with a digital camera flying autonomously on a pre-planned course and collecting multiple vertical overlapping aerial photos. The aerial photos are then processed using photogrammetry software, which combines or “stitches” the images into a single high-resolution orthomosaic aerial map. The software stitches the images by matching like terrain features and objects on the ground in the overlapping portions of the photos. The software “orthorectifies” the aerial maps by correcting camera sensor and lens distortion and errors created by changes in ground terrain. The software also generates other useful datasets such as topographic contours, digital surface models, digital terrain models, and 3D site models.

The accuracy and resolution of aerial images are directly related to the GSD. GSD is the distance between the centers of two consecutive pixels or the width and height of a single pixel in a digital aerial photo. The GSD on drone images is typically expressed in centimeters per pixel. The variables that affect GSD are drone flight altitude, camera sensor resolution, and camera lens focal length. Most aerial mapping projects are flown at altitudes ranging from 150 to 400 feet above ground level (AGL). The table below illustrates the GSD for different altitudes using a DJI Phantom 4 Pro, a drone commonly used by Wilcox for aerial mapping. 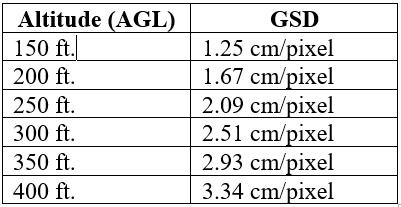 As the table illustrates, a lower flight altitude yields a smaller GSD, and a smaller GSD yields a more accurate and higher resolution aerial map.

Two components of accuracy are related to aerial maps – relative (local) accuracy and absolute (global or spatial) accuracy. Relative accuracy refers to local accuracy, “to-scale” or the measurement of how points are locally positioned in relation to each other on an aerial map. Absolute accuracy refers to the difference between objects on an aerial map in relation to their true georeferenced position on the Earth (i.e., latitude, longitude, and elevation).

Aerial maps do not provide a high degree of absolute accuracy unless ground control points (GCPs) are used during the drone aerial mapping. GCPs are large marked targets spaced homogeneously on the ground and visible to the drone’s camera. The center of each GCP is assigned a latitude, longitude, and elevation coordinate typically determined using highly accurate Real Time Kinematic (RTK) GPS surveying equipment. Photogrammetry software uses the GCP coordinate data as a reference to match up all other coordinates on an aerial map. GCPs greatly increase the absolute accuracy of an aerial map, as illustrated by the table below. GCPs can also nominally increase the approximate relative accuracy of an aerial map.

It’s important to understand that drones and photogrammetry software are mapping tools that complement but are not a substitute for traditional ground surveying methods and practices. Claims such as “survey grade” and “sub-centimeter accuracy” are used rather loosely when describing drone mapping. Such claims are often inaccurate. If achieving the highest degree of precision is important for an aerial mapping project, using a licensed surveyor to verify the accuracy of the data generated by a drone flight and photogrammetry software is a strongly recommended practice.

What Are You Looking For?